U.S. equities pared initial declines to rise towards the end of trading on Wednesday and the yield curve flattened ahead of the Thanksgiving holiday as the minutes from the last Fed meeting stressed flexibility on tapering asset purchases while PCE inflation rose along with consumer spending.

The Minutes from the Fed’s early November meeting showed “participants stressed that maintaining flexibility to implement appropriate policy adjustments on the basis of risk-management considerations should be a guiding principle in conducting policy”. The minutes also noted, “the committee would not hesitate to take appropriate actions to address inflation pressures that posed risks to its longer-run price stability and employment objectives”. The yield curve steepened with the 2-year yield rising +2.6 basis points while the 10 and 30-year yields fell -2.6 and -5.7 basis points signalling the market remains confident the Fed will prevent price pressures from spiralling. Overnight interest rate swaps are now pricing in a full rate hike by June 2022, with two-thirds of a hike priced in for May 2022 on expectations the Fed will likely taper quicker than previously stated and raise rates to deal with heightened inflation. 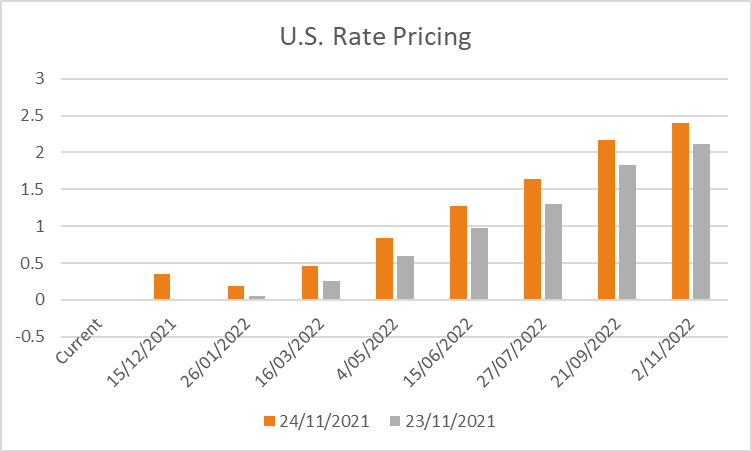 Elsewhere in a business day for economic data core PCE prices for the month of October rose +0.4% from +0.2% in September as forecast with headline prices rising less than forecast at +0.6% for the month vs +0.7% forecast from a revised +0.4% previously. Personal spending remained stronger, rising +1.3% in October vs +1% forecast from +0.6% prior with a similar measure within the GDP figures for Q3 released overnight rising +1.7% vs expectations to remain unchanged at +1.6%. The second estimate of Q3 GDP showed the economy expanded at an annualised rate of +2.1%, slightly below estimates of +2.2% but up from +2.0% previously. A core measure of durable goods which excludes transport rose +0.5% as forecast in October, down from a revised higher +0.7% previously. Initial jobless claims fell to the lowest level since 1969 at +199k vs +260k forecast and a prior revised higher figure of +270k pointing to strength within the labour market. Still, consumer sentiment remains weak with the University of Michigan final reading of consumer sentiment for November at 67.4 from 71.7 previously, modestly above estimates of 66.9 although this is expected to normalise in coming months with the labour market expected to continue to strength while inflationary pressures are expected to ease in 2022. 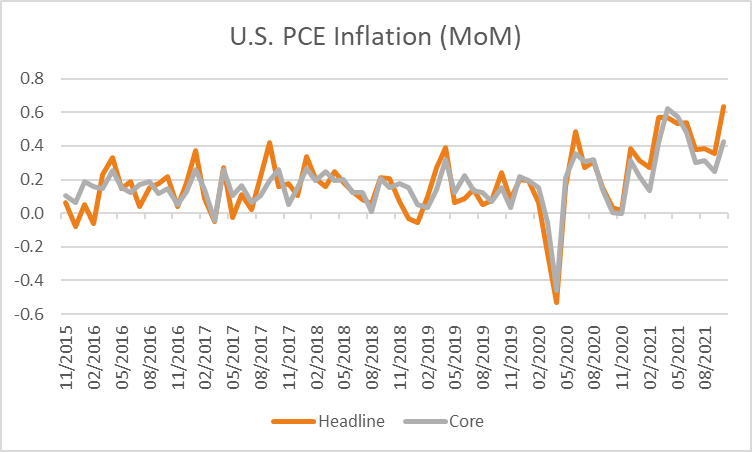 This article was written by James Woods, Portfolio Manager, Rivkin Securities Pty Ltd. Enquiries can be made via [email protected] or by phoning +612 8302 3632.